Nicolas’ Birthday Club began with a wish: “I want to give to kids”

When Nicolas Halford’s seventh birthday was coming up, the little boy thought hard about what he wanted. He didn’t want toys, books, video games or other things children typically ask for when their big day comes. He wanted money, so that he could donate it to help less fortunate kids in his community.

“Some kids don’t have money and toys and – yeah – they don’t have a lot of things,” said Nicolas. “I want this money to go to them so that they can buy toys and like food and like get a house and all that stuff.” 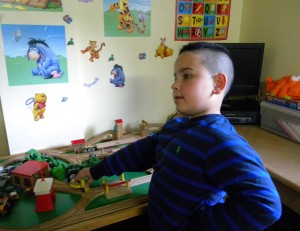 The children’s play area is a modest space with gently used toys including a plastic doll house and wooden train set.

With his parents’ help, Nicolas wrote an e-mail to his family members and friends, asking for cash for his birthday, which he celebrated with a pool party!

When asked why he wished to donate birthday money instead of getting presents this year, Nicolas told us, “Because I know that’s nice.”

Nicolas’ birthday money will help clients of the trauma counselling program at Sources Women’s Place who can’t afford to buy birthday presents for their children.

Their first stop was the children’s play area. The siblings examined the toys. Nicolas quickly noted there were many missing: LEGO, a trumpet, learning video games and Playmobil for babies were among those on his list.

Next, they explored the eating area where women drop in to enjoy a free lunch four times a week, and the large shed outside which contains a bathroom facility and clothing donations. Now he had a better idea of what the centre was about, what it had and what it needed.

After the tour, it was time to officially present Nicolas’ donation to Denise. With a beaming smile, he handed her his birthday money – $200 in $20 dollar bills – in a crisp white envelope. 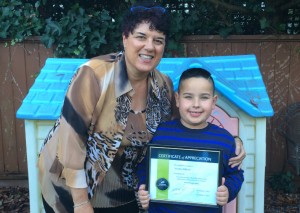 Denise thanks Nicolas for donating his birthday money

In return, Denise presented Nicolas with a certificate of appreciation and declared a birthday fund in his name – Nicolas’ Birthday Club.

She and the Halfords hope that other young people will be inspired by Nicolas’ generosity and will start their own birthday fundraisers to help kids in the community.

“I challenge you to donate your birthday money to kids and Sources too!” said Nicolas.

Nicolas is a kind kid and likes helping others. The day after he donated his birthday money, he came back to Women’s Place to drop off bags of clothes he wanted to give to other children!

Curious Nicolas cares about his community

“We talk a lot at home about giving back and making it a continual thing,” said his mom Holly. “When you get kids involved in giving back to other kids, it makes the world go around.”

Nicolas gets it. He wants to be a policeman when he grows up and can hardly wait. “Today, we went to the library at my school and I got a police book,” he told us proudly.

“We are so proud of him,” Holly said. “He said to us, “I want to give to kids,” and it could’ve been international but he wanted to give to people here. So, we spent some time looking and chose Sources because we really want to support people who live amongst us, neighbours and friends.”

Read about Nicolas in the Peace Arch News!